Online and on the Streets, Egyptian Youth Keeps Guessing

You are here: HomeAnalysisOnline and on the Streets, Egyptian Youth Keeps Guessing

More than a month and a half after President Hosni Mubarak stepped down, and almost three weeks since I left Egypt, my Facebook page remains crammed with posts from Egyptian activists.  Proud of the revolution that ousted much of the old regime, and anxious about the future, they say only one thing is certain.  And that is, at present, that nothing is certain in Egypt.

“No one knows what’s next!” 24-year-old activist and blogger Amr Fekry told me in a Facebook message.

Loud, lusty political speech in Egypt, however, appears to be here to stay.  Just last fall, the streets of Cairo were not considered a safe place to talk politics.  On Skype Monday night, 23-year-old Hamada Elrasam told me from Cairo that, like in the days of the uprising, the city remains packed with protesters, and there is constant political chatter.  “All the people in Egypt, they won’t shut their mouths again,” he said before his image froze due to a slow Internet connection.

The mood among activists online also continues to change daily.  Last week, the Egyptian buzz on the web was dark.  Reports circulated about abuses against protesters, who continue to demand the ouster of remaining party officials from high-level positions, higher wages, and a medley of political and human rights reforms.  Other protesters call for the end of protesting.  Activists believe that ‘counter-protesters’ are also taking to the streets, seeking to create chaos to ease the old regime back into power.

One Lebanese friend updated his Facebook status last week to quote a widely circulated report that accuses the army of human rights abuses:  “Women protesters have been beaten, given electric shocks, subjected to strip searches while being photographed by male soldiers, then forced to submit to ‘virginity checks’ and threatened with prostitution charges.”  He followed with his own take on the situation: “NO COMMENT!!!” he wrote.

Other friends said Egyptian college students who have been protesting day and night against corruption and ruling party leadership in the universities were arrested.  The tents the protesters were sleeping in were torn down like those in Tahrir Square weeks before, they said, only to be erected again days later.

This week, however, the mood has lightened considerably.  The army—sometimes viewed as activists’ greatest ally, and sometimes as their foe—took great leaps to convince people that their greatest fear, a military dictatorship, is not on the agenda.

They said the hated emergency law, the one that allows security forces to arrest any Egyptian at any time without explanation, will soon be lifted and the old regime will not be let off the hook.   On Monday, the army announced that Mubarak will not be allowed to leave the country, even for medical reasons.  Parliamentary elections were also moved back to September 2011, giving new political parties unprepared for elections, originally scheduled in August, a chance to compete—a move perhaps aimed at sweetening those who opposed the March 19 constitutional changes.

For weeks running up to the March 19 vote on proposed changes to nine articles in the Egyptian constitution, many of my Facebook friends changed their profile picture to reflect their opinion on the issues. For those that published a red square with the word “no” written in Arabic, the scheduled parliamentary elections were a central issue.  If there are elections in August, they said, only the old ruling party (the NDP) and the Muslim Brotherhood would have the resources to launch a campaign.  The writing of the new constitution would then be presided over by a new parliament that excluded the liberal youth movement.

The vote went badly for many of my young activist friends, and 77 percent of Egyptians voted for the changes.  On Facebook, they insisted that the Muslim Brotherhood, eager to leap into the power vacuum, secured the ‘yes’ vote by convincing people it was a vote for Islam, or just by offering voters stuff.  “The Muslim Brotherhood used the money and bags of rice and sugar to make some people vote yes,” wrote 26-year-old activist Mohamed Khalil in a Facebook message.  He then posted YouTube videos that show bearded men standing near mosques campaigning for the constitutional amendments.  A campaigner for Nubian rights, Mohamed’s profile picture now is a woman with a sign that reads: “Basic Human Rights for All = World Peace.”

Other liberal friends, some who changed their profile pictures to a green square that read, “yes” in Arabic, said they supported the changes without coercion.  In a Yahoo chat session, Business Development Specialist Amir Mohsen told me he supported the changes, and they represented a move towards democracy. “It’s a first step,” he said.

Yet other ‘yes’ campaigners countered accusations that the Muslim Brotherhood was exploiting the referendum for its own ends.  Quoted in Ahram Online, Mohamed Osama, who is a member of both the Brotherhood and the Revolution Youth Coalition—the Brotherhood campaigned for the changes, while the coalition, of which it is a part, campaigned against them—argued, “I think people’s fear that the Muslim Brotherhood will dominate is illegitimate because we already declared that we would only be running for 30-40 percent of the seats and no more.” Ahram Online also reported that the Wasat (Center) and Labor parties also supported the ‘yes’ campaign.

After all the turmoil over the vote, however, the results no longer seem relevant.  The army now appears to be determined to keep the young liberals happy, and everyone confused.  Army leaders say the amendments are no longer amendments because the entire constitution is no longer valid.  The amendments will be part of what they are calling a “constitutional declaration.”  This declaration is to be law until a new constitution is written.  Who will write it, when, and under what supervision remains a mystery.

When I asked Amr exactly what his perception of the army was, he sent me a link to the blog of Soha Bayoumi, a visiting fellow at the Harvard University Department of Government.  Bayoumi describes the army’s position as an evolving process.  “The stance of the army has gradually evolved,” she writes in her March 28 post,  “from neutrality, to an attempt to appear like the protector of the people and the guardian of the revolution by recognizing the people and their revolution as the only source of legitimacy at the time of the toppling of the Mubarak regime, to an attempt to appease the people by presenting options and waiting for the popular response and finally, by its decision to take things into its own hands and squash protests.”

Economic stability in Egypt seems to be the current focus of the military leadership, Bayoumi added.  And on Tuesday, the day after her post, Justice Minister Mohamed el-Gendy defended a proposed law that would criminalize some protests.  El-Gendy said constant street rallies are keeping tourists and investors away and called the law, “temporary legislation” that will end “the day the emergency law is scrapped,” according to Bloomberg News.

After the connection reset, Hamada, my Skype friend told me one of the hardest things for Egyptians now is figuring out which of the flood of political factions that have appeared on the scene this year actually represent the interests of the pro-democracy protesters that spearheaded the revolution. “You can’t understand who you can believe and who is telling lies,” he said.  “In the days of the Mubarak, and of the revolution, it was easy to tell how to feel.” 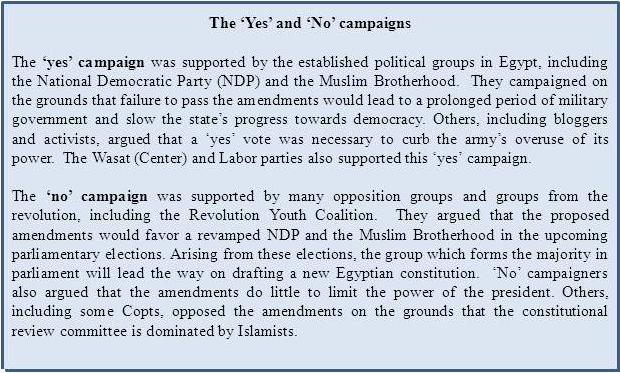 Note: The photograph above was taken by Heather Murdock during the uprising. At that time the military was wildly popular with the revolution’s youth movement.